Meghan Markle Has Reportedly Been Spotted ‘In Tears,’ Her Father Thomas Markle To Blame?

Meghan Markle has only been married to Prince Harry for a little over two months, but a new report claims she is already struggling with life as a royal. The New Duchess of Sussex has faced heavy scrutiny over everything from her style choices to how she crosses her legs, and most recently she has received backlash for trying to hold Prince Harry’s hand in public. To make things worse, Markle has had to deal with attacks from her family, and insiders say that she is breaking down because of it.

According to Life & Style, the former Suits actress’ health is deteriorating because of her new royal life.

“Her rings are slipping from her hands, and her hair is thinning,” an insider told us. “She loves Harry, but when it comes to life as a royal, she’s lately been asking herself, ‘How will I get through this?’”

Markle is apparently putting up a false front during public appearances, but behind closed doors, she has been in tears because she feels so alone. Her family has caused her serious grief, with her dad Thomas making deals with paparazzi and giving tell-all interviews, and her sister, Samantha, tweeting that if their father dies, she is holding the Duchess responsible.

Since she can’t talk with fans via social media, sources say that Markle is leaning on her sister-in-law, Kate Middleton, for support. The two women went on a girls-only trip to Wimbledon earlier this month, and the future Queen consort told Markle that she is always there for her.

Insiders say that Markle needs all the support she can get because right now she doesn’t feel like she can do anything right.

She will soon be celebrating her first birthday as a member of the royal family. Markle turns 37 on August 4th, but Thomas says he doubts he will be able to reach her to wish her a happy birthday. Last weekend, the former Hollywood lighting director told The Daily Mail that his daughter has punished him by removing him from her life completely. 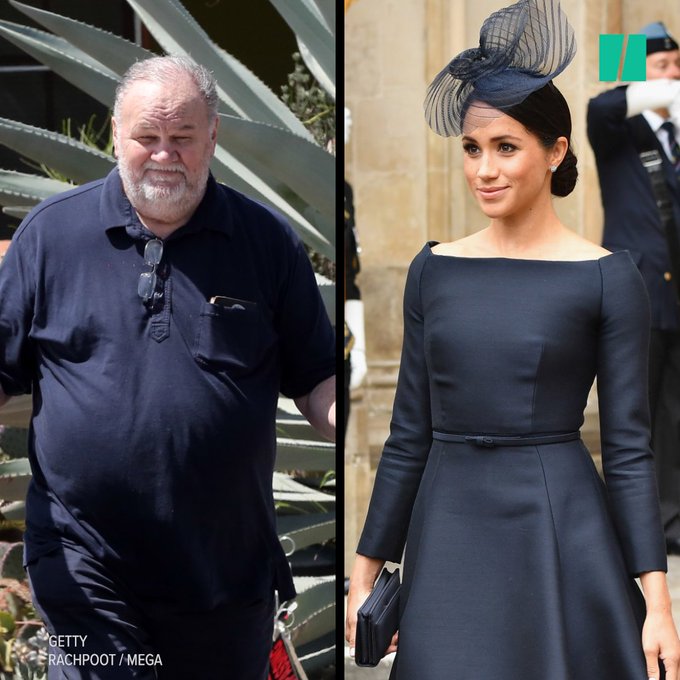 Thomas Markle said he “won’t be silenced” in a scathing new interview about Meghan’s life in with the royal family.

During a nine-hour interview over three days, Thomas said that he is hurt that Meghan has cut him off and he has no way of contacting her. He says it has been ten weeks since the two have talked, and the palace has disconnected the phone number he had for Meghan’s personal aides.

Thomas also said that it might be easier for Meghan if he died, but he is lucky to be alive after he suffered a heart attack days before his daughter’s wedding in May. His health problems famously caused him to miss Meghan’s wedding where he was supposed to walk her down the aisle.

Thomas revealed that he fears the rift between him and his daughter may never heal, but he “won’t be silenced.”

Meghan Markle and Prince Harry have not commented on her father’s demands and pleas.

I will be happy to put Stonebwoy on a song with Chris Brown & Tyga- DJ Khaled.