Real Housewives of Orange County star Shannon Beador is in the middle of a nasty divorce from her estranged husband, David, and she recently revealed on The Daily Dishpodcast that he wants to cut all ties with her — and that includes taking back his name.  Will Shannon drop the Beador name because David wants her to?

“It’s been requested from my ex that I’m not worthy of the name Beador,” Shannon said. “For the sake of my kids, I think I’m going to stay Shannon Beador.” 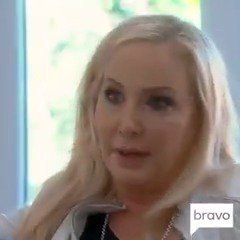 Shannon and David split last October — and she filed for divorce in December — after his famous infidelities that RHOC fans watched play out over the past few seasons. The mom of three says that if she ever considers getting married it again, it won’t be until she gets to know the person because she is not getting divorced again. Beador explained that “once is enough.”

Beador’s co-star Vicki Gunvalson recently told Page Six that the split is equal to “financial suicide,” and David recently broke his silence by saying that the divorce is sad for their children because Shannon chooses to share every detail with the press and on different Bravo TV shows.

David also talked about Tamra Judge’s claim that he started talking to his girlfriend, Lesley Cook, back in October, around the same time he split from Shannon. He says that there are two sides to every story and relationship, and he believes most people can see through it.

He added that Judge’s suggestion that he met Cook before he separated from Shannon was a “premeditated lie,” and he is certain that Judge and his ex talked about it before they filmed the scene. David says that his new girlfriend is an amazing, beautiful woman and mother, and she doesn’t deserve the negative press that Shannon and her co-star conjure up.

David concluded by saying that he wishes Shannon the best and he hopes she finds happiness with the men she is dating.

An insider says that Shannon Beador is focusing on herself and being a mom.

Nigeria To Get Help From UK Government Regarding Unemployment.